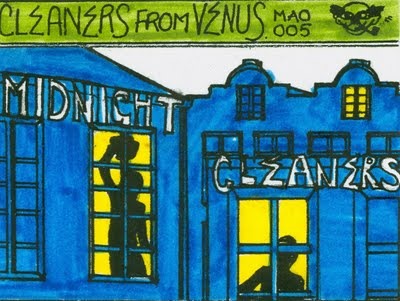 Burger Records, a vinyl/cassette label based in Fullerton, Ca. and run by members of Audacity and Thee Makeout Party, have reissued 3 cassette tapes from Cleaners From Venus. "Midnight Cleaners" (1982), "In The Golden Autumn" (1983), and "Under Wartime Conditions" (1984). These cassettes have been loooong out of print and nearly impossible to find. If not for blogspots, some of these tracks would never be heard again. Martin Newell (Mr. Cleaners or Mr. Venus???) started recording and releasing under the moniker Cleaners from Venus way back in the early 80's. Most of his early output were cassette released, 4 track recorded pop masterpieces. One of the earliest originators of the "bedroom pop" style...a mix of lo-fi jangle, 60' nostalgia, 80's post punk, and hook-filled powerpop, Cleaners From Venus' gained a cult following dedicated enough to pay big big bucks on Ebay for anything with Mr. Newell's stamp on it. Get these before they are gone!

To order these cassettes go to Burger Records.

Want to master Microsoft Excel and take your work-from-home job prospects to the next level? Jump-start your career with our Premium A-to-Z Microsoft Excel Training Bundle from the new Gadget Hacks Shop and get lifetime access to more than 40 hours of Basic to Advanced instruction on functions, formula, tools, and more.

Other worthwhile deals to check out:

Join the Next Reality AR Community

Get the latest in AR — delivered straight to your inbox.